Behind the big strokes he loved,

one can always sense a pulsating emotion, because

Dewis painted with his heart as much as with his brushes.

The Journal of Biarritz and the Basque Coast, 1946 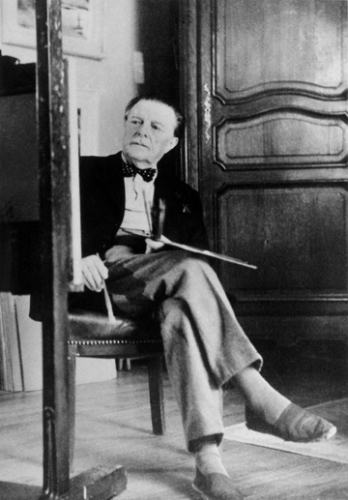 Post-Impressionist painter Louis Dewis (1872–1946) was born in Belgium but lived the last 60 years of his life in France. His works are exhibited at the Orlando Museum of Art.

As explained below, Dewis didn’t begin painting seriously until he was 43, but his works received rave reviews from art critics in Western Europe from 1916 to his death in 1946.

Click here to see a one-minute video with examples of why so many reviewers cited the strong emotions communicated in his paintings.

For a detailed biography, visit the Louis Dewis Wikipedia Page.

Louis Dewis (pronounced lew-WEE dew-EES) was the pseudonym for Isidore Louis DeWachter, who went by “Louis.” He was born in Leuze, Belgium, the son of Isidore Louis DeWachter (who used his first name) and Eloise Desmaret DeWachter. Although the name “DeWachter” has Flemish roots, Louis always considered himself a Walloon.

Dewis’s father, Isidore, and two of Isidore’s brothers created the world’s first department store chain in four locations in Belgium in 1868 – more than 30 years before Woolworth adopted the concept in the United States. For business purposes, they decided not to use the capital “W” in the family name and christened the chain Maisons Dewachter (Houses of Dewachter). Because the stores became so famous, most published references to the family would also be spelled “Dewachter.” Over the course of Dewis’s life, the family itself would come to adopt the spelling “Dewachter.”

Maisons Dewachter offered ready-to-wear clothing for men and children – and specialty clothing such as riding apparel and beachwear.

Louis was a child prodigy – showing astonishing talent at the age of eight. Mature painters would have been proud to produce the works that Dewis was creating as a teenager.

Click here to see a minute-and-a-half video on the oldest painting we have in The Dewis Collection, created when Louis DeWachter was only 12 years old.

Louis spent his formative years in Liege, Belgium, where his closest boyhood friend was Richard Heintz (1871–1929), who also became an internationally known landscape artist. But circumstances conspired against a career in art for the young DeWachter, who would be forced to wait more than three decades before realizing his dream.

Isidore was embarrassed that his son would waste his time with something as “useless” as painting. In a vain attempt to break his young son of this “bad habit,” the elder DeWachter would, on occasion, destroy or throw away the boy’s canvases, paints and brushes.

Young Louis’ love of art could not be deterred. It could, however, be overwhelmed by business and family responsibilities.

As the eldest son, Louis was expected to take over the family business. This was a duty that his father would not allow him to shirk. Dewis would come to manage 13 of the Maisons Dewachter by the 1910s. Overall, the chain had “branches” in more than 20 cities and towns across France and Belgium, some localities having multiple stores.

Louis Dewachter married Elisabeth Florigni in 1896. His elder daughter, Yvonne, was the first woman to graduate with a degree in mathematics from the University of Bordeaux. It was in that city that she met graduate medical student Dr. Bradbury N. Robinson, an American Army officer and a veteran of World War I who had gained fame in 1906 for completing the first forward pass in American football history. They married in 1919 and moved to the States in 1926.

Dewachter’s younger daughter and only other child, Andrée, married wealthy French businessman Jérôme Ottoz, who proved to be less than supportive of his talented father-in-law.

The successful merchant was a “Sunday painter” and had an atelier in his home as soon as he was free of the dictates of his father. His work was so impressive that, although he sold few works, he was named by France as an Officier d’Académie (Silver Palms) in 1912. It was the first of many honors France would bestow upon him for his artistic achievements, including the Chevalier de la Légion d’honneur, Officier de l’Instruction Publique (Golden Palms), and the Médaille de la Société d’Instruction et d’Education Populaire. In addition, the former French colony of Tunisia awarded him the Order of Glory.

He began to focus on his painting about 1916 and it was at that time that he adopted the nom d’artiste Dewis. In the summer of that year, Dewis staged what was probably his first exhibition in Bordeaux, news of which reached across the trenches that divided France in the midst of World War I – to his native Belgium. Le Vingtième Siècle (The Twentieth Century) was clandestinely publishing a one-page edition in German-occupied Brussels. The paper somehow obtained a review of Dewis’s exhibition. It expressed sentiments that critics would echo for the next thirty years:

…”singing” landscapes attract the eye. This is how he must paint, with no other care than to allow his soul to vibrate like a bird, in the light...

When World War I ended in 1918, Petit essentially demanded that Dewis sell his interest in Maisons Dewachter and “come paint for me in Paris and I will make you famous.” By then, Dewis had been freed of the dictates of his father who passed away before the Great War. Under the unrelenting pressure of Petit and the famed Belgian author and art critic Henry Dommartin who also insisted that Dewis was wasting his extraordinary gift, the artist finally acceded to their wishes. He moved to Paris in the spring of 1919 to put his career in the hands of Petit. But, within a year, the great marchand d’art (art dealer) was dead and Louis was, once again, on his own.

For the next 20 years, until the onset of the Second World War, Dewis’s landscapes were shown regularly at exhibitions across Western Europe and North Africa. His work attracted favorable reviews in the international press and the highest decorations from the governments of three countries.

Few landscape artists, in my opinion, among our modern painters, reach such a profound expression of truth in a finer art form.

The highest achievement of fame eluded Dewis, as the Belgian’s work would never be heavily promoted. By the end of the 1920s, Dewis had reconciled himself to this reality, and happily so. As he told his family, “I paint as the bird sings” – for the sheer joy of expressing his emotions.

Collectors and museums from Europe, the French colonies, South America and Japan continued to purchase his paintings – and critics continued to rave.

The art of Louis Dewis appears in the magnificent maturity of a learned and profound spirit of observation put at the service of a firm technique, devoid of any indication of contrivances in pursuit of effects.

Everything proves that among our Belgian artists, Dewis does not occupy a secondary position.

Dewis and his family fled Paris for the South West shortly before the Nazi occupation of 1940, initially staying with relatives in Bayonne. They heard of a large residence with lovely gardens that was becoming available in the nearby resort city of Biarritz. With the onset of war, the American expatriate owner was heading back to the US, so he was anxious to sell the home that he had named for his wife: Villa Pat. It was here that Dewis would paint for the last seven years of his life.

All this represents painting, imposing, rich in colors, the painting of a master.

Biarritz wasn’t far from Bordeaux, where Dewis had lived from the age of 14 to his marriage and from 1908-1919. He was once again inspired by the countryside of the Pays Basque.

Since travel was greatly limited during the occupation, Dewis often found his subjects within his own garden, in nearby parks and along the Atlantic coast.

Louis Dewis died of cancer at Villa Pat in late 1946.

A great painter has just passed away in Biarritz: Louis Dewis.

The man was as good as the painter…

Through his acclaimed talent, he brought something new to this region, for which, as well as for the painting, his death is a great sorrow.

Andrée was intent on preserving everything related to her beloved father’s artistic career. She carefully crated up the entire contents of his atelier in Biarritz and transferred them to the attic of her 19th century condominium building in Paris’ 17th arrondissement. The sturdy wooden boxes were placed in a locked room that was originally designed as maid’s quarters. There they would sit, untouched, for nearly 50 years.

In 1996 – Andrée and an American great-nephew opened the crates and resolved to return Dewis’s work to the public. In the ensuing years, more than 125 Dewis works found in his daughter’s attic have been cleaned and framed. The first result of the effort was 1998’s Dewis Rediscovered – an exhibition held at the Courthouse Galleries in Portsmouth, Virginia.

The Belgian ambassador to the United States, Alex Reyn, was an honored guest. He requested the loan of three Dewis paintings for permanent display in his country’s embassy in Washington, DC. The ambassador personally selected the pieces – including one for his office and a large painting of the Ardennes that was the only art exhibited in the principal public waiting area.

Dr. Linda McGreevy, the Chair of the Art Department at Old Dominion University in Norfolk, Virginia – and an expert on French art between the two world wars – wrote the catalogue essays for the first two Dewis exhibits in America.

[Dewis] seems poised … to claim a place in modernism’s broader trajectory … his luminous paintings … may well receive the recognition their creator deserved long ago.

The first Dewis exhibition at a major museum was staged at the Orlando Museum of Art from January 25 through May 5, 2019, the 100th anniversary of Dewis’s decision to sell his business interests and move to Paris to begin his life as an artist in earnest.

Dewis’s work does not fit neatly within today’s familiar narrative of 20th-century European modernism, but in his own time, his work would have been seen as the mainstream of French art … So the work of this accomplished painter can provide new insights about the period in which he worked.

The Dewis Collection and The Orlando Museum of Art are considering the creation of a home for the collection in Orlando – to make the Belgian’s work available for the public to enjoy on a permanent basis.